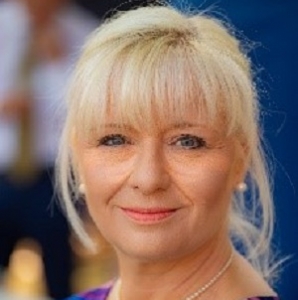 Kate was Janet Palmer’s first pupil and trained with her, and at Mayhew School, Northampton in RAD Ballet and ISTD Modern, Tap, National and Greek. She first entered the ‘Sunshines’ in 1966 and continued to compete in All England festivals until 1978. After studying for a degree in dance, she then worked as a professional dancer in a rival company to Hot Gossip in London and abroad in the early 1980s, as well as acting in T.V. programmes including ‘By the Sword Divided’, ‘Auf Wiedersehen Pet’ and ‘Shine on Harvey Moon’.

She worked as a choreographer at The Royal Theatre in Northampton, before studying for a P.G.C.E as a dance specialist and then working as Head of Dance, Advisory Teacher of Dance, helping to organise the All England Midlands North Regionals and choreographer for a student touring dance company.

Throughout the years Kate has maintained close contact with the festival movement, being on the committee for Northampton Festival, working as an adjudicator’s scribe and entering her own children successfully.

Kate now works as a Dance and Musical Theatre History Lecturer at Urdang Academy, London and thoroughly enjoys working with students in vocational training as well as maintaining contact with the state sector as an A Level examiner.